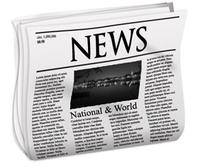 clippings; scrapbooks
Newspaper clipping of a letter to the editor originally published in the New Republic in November 1869. Describes the events of November 6, 1869 when a group of about 30 women students from the Woman’s Medical College of Pennsylvania (WMCP) went to the Pennsylvania Hospital amphitheater to attend a clinical lecture also attended by several hundred male medical students. Their attendance drew a strong response from the male students, which included heckling and spitballs. This event came to be known among students, faculty, and alumnae of WMCP as the “The Jeering Episode.” The Jeering Episode and the ensuing debate about women medical students were widely covered in regional newspapers, and this is one of the numerous articles about the incident collected by Woman's Med. The scrapbook was made by pasting clippings into an existing, bound, printed volume.

Loading JW Player...
I was present at the Pennsylvania Hospital last Saturday week, and having beheld the alleged assault on these thirty-four, volunteer to relate the circumstances, as, being the only person present from Camden, I am better qualified to do so than writers absent from and entirely ignorant of the affair. I was there throughout the whole, and positively assert that no one in female attire was hissed, booed, or insulted. Who is this shameless heard of sexless beings who dishonor the garb of ladies? This beardless set of non-blushers who infest the rights of four-hundred regular medical students who have sustained the clinics from their foundation! Who in their indecent effrontery would compel us to witness clinical exposures in their presence! This neuter thirty-four who have shamed common decency by their unwelcome and uninvited presence to the disgust of every student and the loathing of the instructors! Who, by their immodest persistence have shamed all gentlemen from those clinics! Whose lewdness has caused comments, not only from the clinical professors, who do not recognize their presence as medical students, but also the contempt of all refined ladies, and in whomever else exists a spark of instinctive modesty! All these attempts at mixing, they say, is being done to cause an equality to be established between these beardless neuters and regular medical students. This kind of equalizing would not elevate the standard of the thirty-four, but would degrade that of the four-hundred gentlemen who see in them only the sort of beauty they call human in hell. I do not mean to assail the character of this genderless mass, I would not attack anything so weak; yet I would ask in true candor whether the feelings of our refined lady acquaintances would be exalted towards us if these unblushing beings were to become our associates.