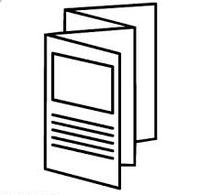 pamphlets
Pamphlet created by the American Women’s Hospitals highlighting their work around the world, including Greece, Albania, Greece, India, and the southern United States, and appealing for contributions. Four pages. Illustrated with photographs.

The AWH makes it a point to compare the conditions of the refugee communities around the world with the conditions of the rural American south. The young twin boys and the family depicted on the rural health service page are described as “not refugees in a foreign country, but Americans suffering from diseases due to malnutrition,” By emphasizing the similarities between these two populations --American citizens of the Appalachian region and refugees of war-torn foreign nations-- the AWH highlights the common effects of malnutrition, poverty, and disease. The AWH pamphlet also points out the differences between the two groups: the people of Appalachia are citizens of the United States, , described as worthy of “membership in the Sons and Daughters of the American Revolution,” and are not refugees from an impoverished, war-torn country. In doing so the AWH makes a case for asking for donations to continue their important work to eradicate disease and improve the quality of life for these Americans, citizens of one of the richest nation on earth.

CARRYING HEALTH TO THE COUNTRY. Physicians and nurses with van, made of airplane material, light and strong, for service in rural and mountain districts. Thousands of such people, whose family records would entitle them to membership in The Sons and Daughters of the Revolution, are living in the rural and mountain districts of our southern states. TWINS—Larger one lived away from home. Difference in growth due to food and health. PELLAGRA—Mother dead, father and three children sick, girl of nine, cook and housekeeper. THESE PEOPLE ARE NOT REFUGEES IN A FOREIGN COUNTRY, BUT AMERICANS SUFFERING FROM DISEASES DUE TO MALNUTRITION.