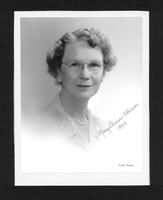 correspondence
Letter written by Dr. Mary Bruins Allison to her family during the early months of her career as a medical missionary, describing her first case.

When Dr. Allison first arrived in Kuwait, she spent much of her time learning Islamic and Arabic culture, and did not do a great deal of medical work. However, she worked closely with a male doctor, Dr. Myrlea, who sent her to visit the sheikh’s wife when she was ill, as the sheikh's wife did not want a male doctor. Dr. Allison describes some of the difficulties of treating purdah (the practice of concealing women and segregating them from men) women and also the difficulties of navigating a new culture.

Loading JW Player...
Dear Family, There were no letters coming through again this week – perhaps there was more rain in the desert. Our weather is beginning to be warmer some days I can go without my coat but we still have a fire in the drawing room in the evening. I’ve had a real case for the last two weeks. I am not really supposed to be doing medical work but the Sheikh’s royal wife has been ill. Miss Van has been seeing her. But His Excellency had the idea that someone with a degree would do better so he asked Dr. Myrlea whether he would send me out as she did not like to have a man doctor. Under those orders I just had to go. After seeing her for a week I thought she needed a little operation. It was really quite a tricky case to have for one of my first cases because she is really the queen and on her husband depends the possibility of our staying here in this town. If they should become angry at us, they could put us out. And the royal family have been treated by the hospital without fees just to keep their goodwill so we aren’t making much on it although the goodwill means more than money. We asked her [the queen] (Miss Van goes along on the case because I cannot speak the language well enough) if she would come into the hospital for the operation and she said, “No.” Things went all right although I made some mistakes but we got what we wanted done. The end is near and I must get ready to go to the palace again so will make this letter short. Affectionately, Mary